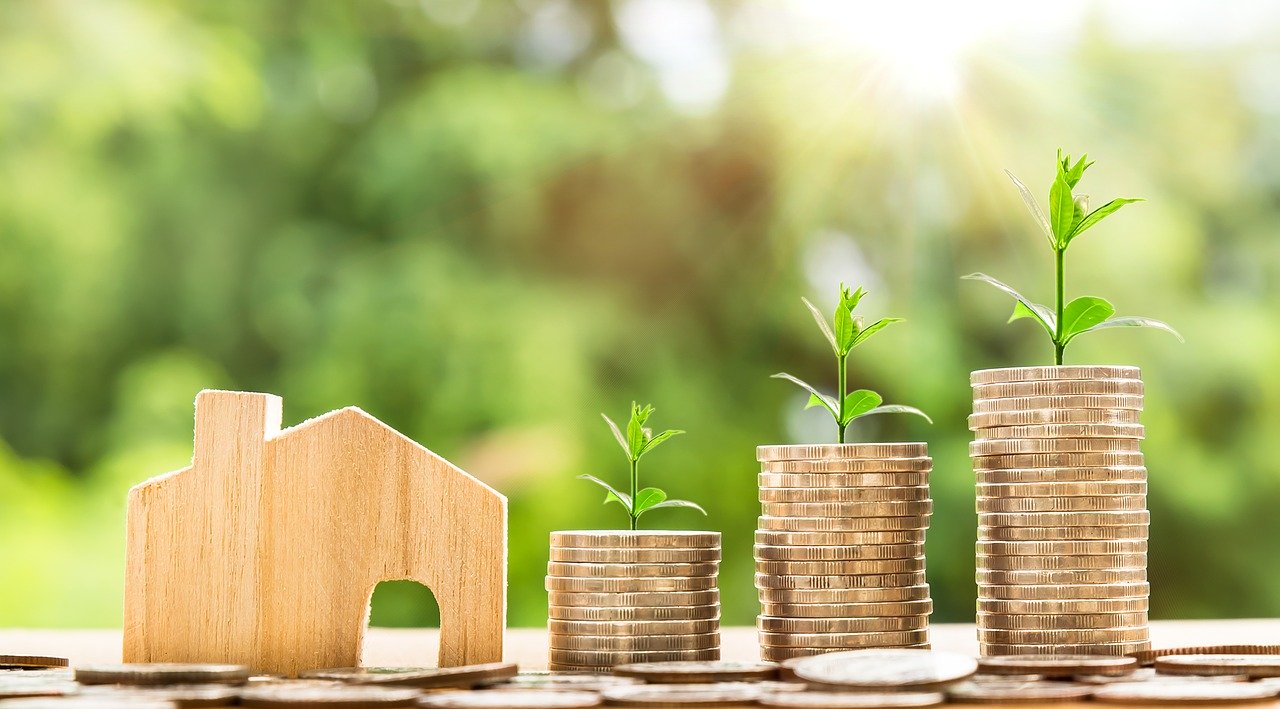 I remember when we first started to look to buy a house, I had no clue how much I could get and I didn’t even think about how much I would want to borrow. Perhaps a little naïve, but I am sure I am not alone.

We were not asking for much, just a small apartment that would cost less than what we were paying in rent at the time. Our financial advisor, the first one I ever talked to, however suggested us to think big – try to get to the max as it would cost more if we needed to move again soon if we were thinking about having kids and would need more than one bedroom.

In the end, I am not sure if we went to the max, we did listen to look bigger and we bought a nice house that felt too big (everything’s big if you’re used to spending your day on 12 m2 with two people). But we are deep down frugal people and kept to looking within our needs, so probably there was still room to get more. This made me think, how much is too much? How much mortgage would I want – if all else was equal? Let’s have a look at this mortgage basic: Loan amount.

While I encourage people to save 100% down for a home, a mortgage is the one debt that I don’t frown upon.

This article is part of a series on the basic variables important in a mortgage:

I will of course attempt to include as many different financial philosophies along the way, although this is a topic where I cannot avoid regional specificity when it concerns rules and regulations that apply to various parts of this discussion.

How much house can you afford?

Legal limits and what the bank is willing to give you

In the Netherlands, you can no longer get a mortgage of more than 100% of the market price, this is the so called Loan-to-Value. This means that assorted expenses such as real estate agents and notaries used in the transaction can no longer be part of the mortgage and need to be paid for out-of-pocket (or by means of another loan – which in turn can affect the size of your mortgage). But also necessary construction is no longer allowed to be put into the mortgage, with the exception of investments to make the house more energy efficient.

Next to the Loan-to-Value, there is the so called Loan-to-Income, which as suggested takes into account your income to determine the size of your loan. The more you earn, the more you can borrow with a maximum set between 13.5% and 37% of your monthly gross income (for non-retirees in 2020, ‘financieringslastpercentages’ in Dutch). Other debts might affect how much space you still have left.

Some of the other articles are coming into play here also – an interest rate fixed for shorter than 10 years will limit the amount you can borrow as the lender has to calculate with the (higher) government mandated interest rate, instead of the actual interest rate. Also the shorter the term of your mortgage gives a higher monthly obligation makes less it interesting for a lender to provide a higher loan. A lower interest rate in turn will lower your net monthly payments, allowing you to get a bigger mortgage loan.

How much house do you want to afford?

That’s great all – being able to buy a house with a mortgage of 233,000 – while only earning a single income of 50,000 per year. But do you want that? Let’s have a look what financial philosophies are out there and see what they have to say about that.

Let’s start with looking at what governments and money lenders use as their philosophical compass. A lot of money lenders use the 28/36 rule, a guideline that says no more than 28% of the gross income should be spend on housing and no more than 36% of the gross income should go towards any kind of debt. This is similar to the Dutch guidelines to determine the Loan-to-Income – which never goes beyond 37% (in 2020). The U.S. census uses a similar 30% as their standard for housing affordability, stating that above this number housing costs become a burden, especially for the lower incomes. Fidelity, an American multinational financial services corporation, goes to a higher spectrum, suggesting a mortgage ranging from 3 to 5 times your annual income should be manageable, depending on your other debts. Depending on your income, using Dutch income taxes (2020), this would be somewhere between 30 – 50% of your net income.

David Bach in his book ‘Automatic Millionaire‘ uses the U.S. Federal Housing Association’s numbers between 29% and 41% (for someone without debt) as lower and upper limits of what someone could pay monthly on their mortgage (or rent, see more comparison between renting and buying in an upcoming article). One of the more conservative financial guru’s, Dave Ramsey recommends your housing payment, including property taxes and insurance, to be no more than 25% of your take-home income. The Money Guy Show takes the same 25%, but then of the gross income – giving more room to spend on housing.

Charles Farrell’s ‘Your Money Ratios’ takes an age dependent number, ranging from having a mortgage of maximum two times your annual income down to zero by the time you reach 65 (see table below), for a happy retirement. Depending on your income, using Dutch income taxes (2020), this would roughly range between 20 – 28% of your net income – so still a comparable starting point to that of Dave Ramsey. 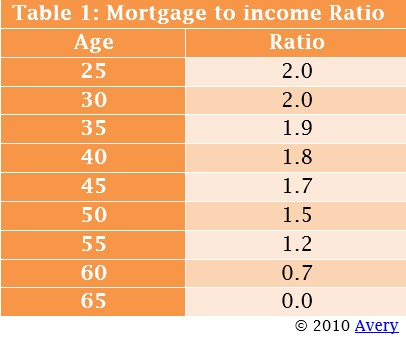 Safe to say that all official guidelines hoover around 30 – 40%, with a preference towards the lower percentage, especially for those with a low income. The financial authors on the other hand gear more towards 20 – 30%, with a stronger focus on the middle section, as the lower range is usually not going to afford someone a home. Everybody agrees that 50% is the real upper limit that should not be crossed to prevent unreasonable financial burdens.

What is my financial philosophy?

I am a fan of Charles Farrell’s Money ratio’s – including his capital to income ratio – and I feel that he is making a good point to take age as a variable.

I feel that the income of partners should not be used equally – the Dutch guidelines also dictate (in 2020) that the first income can count 100%, but the second only for 80%. This I feel is important as income is increasingly less stable and I would suggest to even use a ratio based on only one income. I feel that Farrell’s Mortgage to income ratio takes this into account, as the ratio of 2.0 is basically taking the Fidelity average of 4x your household income, divided by two.

I would suggest taking the gross household income, single or with partner, multiply this by Farrell’s Mortgage to income ratio and take this as your maximum mortgage amount – while making sure that your monthly payments (depending on loan terms and interest rates) don’t surpass the 15% of your household gross income (approx. 24 – 29% of net income in the Netherlands). I understand, it might be a stretch, and not feasible for the first home – it is a financial dream after all. I would also suggest that after 30-years (or sooner) you would make sure to be mortgage free, to enjoy one less worry in retirement.

Do you agree with the philosophy I chose? How much would you think is too much to borrow? 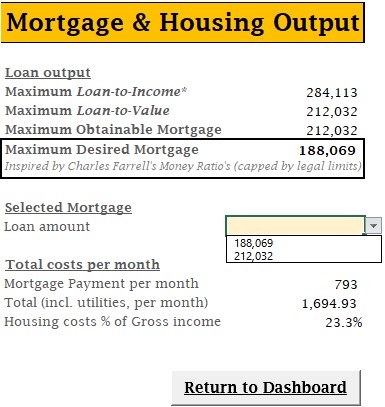