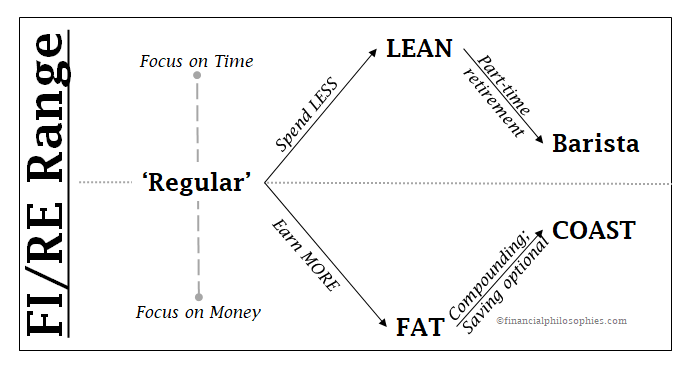 You’ve learned about financial independence, retire early (FI/RE), but you feel that it isn’t quite right for you. Worry not, the internet can provide you with variations to fit your personal taste. Whether it’s because you earn too much to live a frugal life or because you feel you earn too little to even think about FI/RE – you are not alone. Let’s have a look at the different flavors of FI/RE.

“What matters most is how well you walk through the fire.”

First, I should point out that people pursuing FI/RE are definitely a minority. However, as the ‘Regular’ FI/RE gained traction online, it attracted people from various mindsets that just couldn’t agree with each other whether to focus on the finance – or the retirement part. This lead to some variations into the extremes with FAT FI/RE and LEAN FI/RE. So I can hear you think – “what are you talking about? FAT, LEAN?” Well let’s split them up and look at their specific philosophies.

Counter to the original FI/RE concept of Your Money or Your Life where they talked about the concept of ENOUGH, FAT FI/RE extreme focusses on having a life in retirement with a higher standard of living than prior to retirement. If you thought that FI/RE was an luxury concept, this is the top 1% of FI/RE.

The focus is to increase the income as rapidly as possible to build up a massive investment portfolio to have a royal retirement without sacrifices. This variation of FI/RE focusses more on money and status and they count on living on an passive income of around 1.5x to 2x the median income (or more) per year (≥$100.000 in the U.S. translated to approx. ≥€ 55.000 in the Netherlands for a household).

Taking the original concept of frugality to the extreme, LEAN FI/RE focusses on a minimalist lifestyle to ensure a quick (and cheap?) early retirement. However, this variation can go into the extremes when it comes to the sacrifices to make – which might be fine for you, but too much for others. Think of things like, postponing or completele not having children, living in less than ideal environments to cut down the costs of living or prevent spending any money on things to enjoy life, for an early retirement (in which this lifestyle is maintained).

The focus is to decrease spending to almost nothing, to be able to live of  on on approx. two-thirds of the median income or less (≤$40.000 in the U.S. translated to approx.  ≤€ 25.000 in the Netherlands for a household). This variation of FI/RE increased its focus on time and freedom.

What happens with all extremes is that they are hard to maintain and eventually the movement will correct itselfs towards more moderation with the newer COAST FI/RE and Barista FI/RE.

Definitely the most complicated one to define – or determine whether you’ve reached it, the basic principle behind COAST FI/RE is earn and save to the max early on in life. Make sure you’ve build up the nest egg required to keep growing by means of compound interest so that you can continue a life style with your active income without the need of having to save anything. Enjoying the bigger part of your working career not worrying about whether you’re saving enough, because it’s already there. 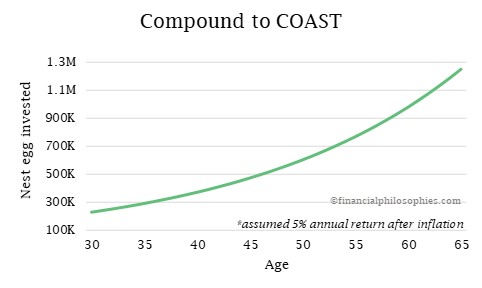 The same would work if Dylan would want to have enough at the age of 40, but he would need to have approx. 370.000 saved. This is where the magic of compound interest makes COAST FI/RE particularly interesting when starting early on in life.

From the FI/RE perspective this approach does bring the drawback that you are not in fact retiring early, you don’t have enough money to do so – however, you are free to choose a less stressful profession or work less hours, as long as you keep bringing home the money you’ll need to live. You are also free to spend all the money you’ll get along the way, with bonusses and salary increases – but this is also where the danger lies. If you let your lifestyle creep up, your new budget at the age of 50 might not be achievable with the amount you estimated at 30. Regular checkups with your realized returns will also be advisable, and perhaps don’t stop contributing to your saving completely?

Also – for those in the Netherlands, realize that the wealth tax will eat away at your savings every year and compensate for this in your estimates. FI/RE savings in general are focussed on the U.S. situations where the money in the bank/market is only affected by market returns and not by taxes (capital gains taxes are also not considered in detail).

Finally, the Barista FI/RE variation, named after coffeehouse employees, is the FI/RE option for those that can survive on a small budget earned through parttime working (optionally supplemented with a (lower) nest egg contribution).

Thus similarly to the COAST FI/RE the Barista FI/RE people don’t actually retire (full-time) early. In fact, there is little difference between the two besides perhaps the lifestyle budget aimed for and Barista FI/RE doesn’t seem to have an actual plan to stop working – besides perhaps the expectation that social security benefits will eventually supplement their investment income.

An alternative Barista FI/RE model is going for the traditional homemaker model, a couple can also decide that one person ‘retires’ from the workforce to stay at home, while the other continues to work full-time as the sole breadwinner.

If we can consider this FI/RE than FI/RE isn’t such a fringe movement afterall as 28% of American households and 20% of Dutch households are a single income family (and therefore on FI/RE?).

In the end, having a more detailed description of your specific movement helps people to identify likeminded people. As the ‘Regular’ FI/RE would have people with complete opposite ways and means to reach FI, it would be harder to find a constructive discussion.

When it comes down to choices the COAST/Barista FI/RE is perhaps a nice gateway to full FI/RE – allowing you the safety of employment while winding down your career. Although in my humble opinion it eventually comes down to a poor man’s FI/RE or a rich man’s FI/RE.

Don’t be fooled, the majority of FI/RE are in the affluent category – either coming into inherited wealth, or working in finance, tech, medicine or other high paying careers. LEAN FI/RE seems to be product of those less financially fortunate to also get the idea that they can be part of the fun – albeit with extreme sacrifices – and it would be interesting to find out the actual success rate of those going on the FI/RE journey, not only if they reach their destination but also if they can maintain the desired lifestyle. For the rest of my opinion on FI/RE check out my previous article.

What do you think of FI/RE? Which approach would suit you, or are you perhaps already pursuing? Let’s get in touch and leave a message below!